Weird Waves Of The World – Gloucestershire

It’s not the most perfect ripable wave in the world but it most certainly does belong on the list of Weird Waves Of The World, it’s the severn bore tidal wave which breaks along the river bank of the Gloucestershire country side in Britain. 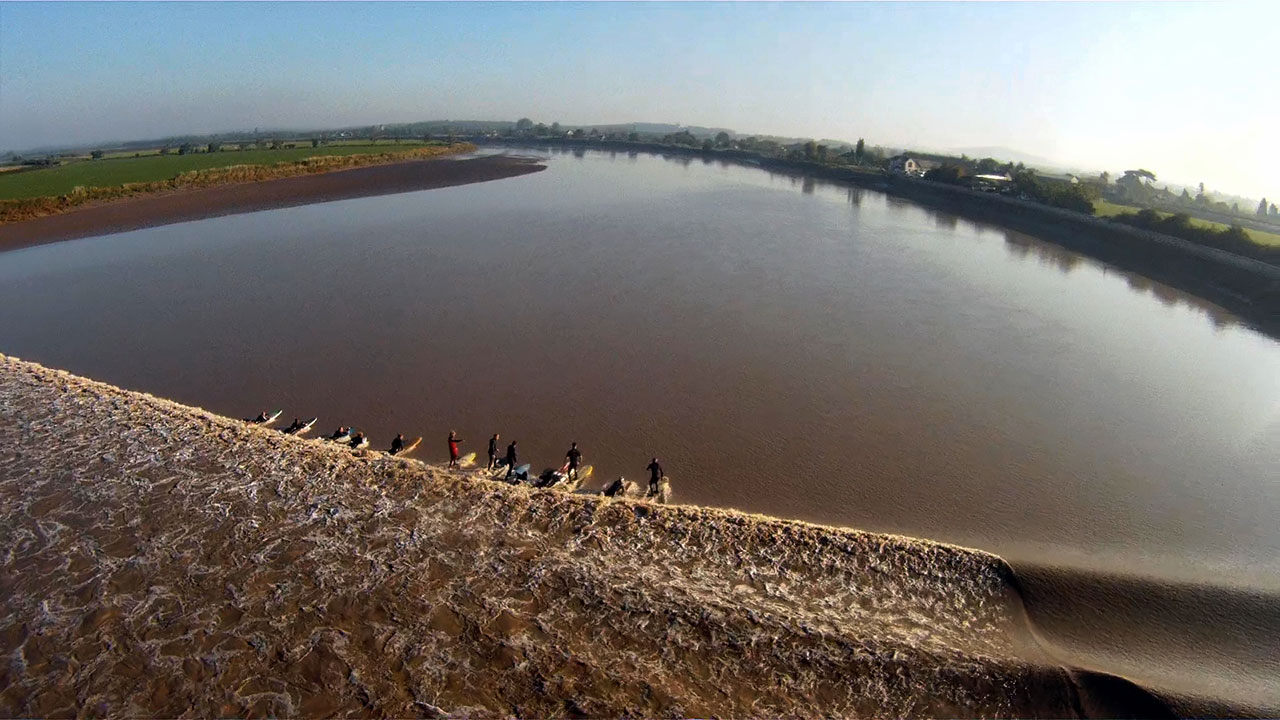 The severn bore is a tidal surge that flows up stream through the Gloucestershire country side, it’s unquestionably Britain’s most lengthy and smelly wave as the river moves in land and narrows, the bore grows in size and is surfable for an incredible 50 kilometres. 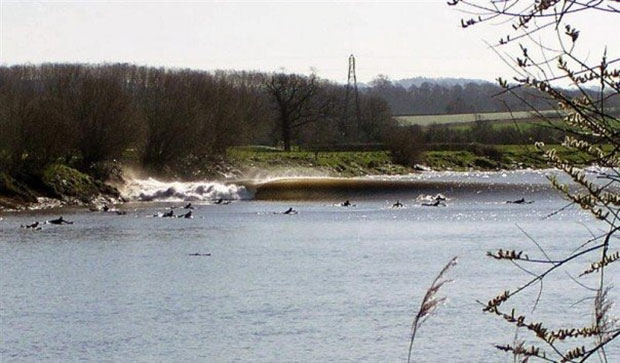 This phenomenon has given birth to the unique surfing experience, surfers jump in and out of cars and boats as they chase the wave up stream in the attempt to surf it as many times as possible, every bore tide brings together an unusual band of inland surfers who are obsessed with riding the longest wave in Britain. 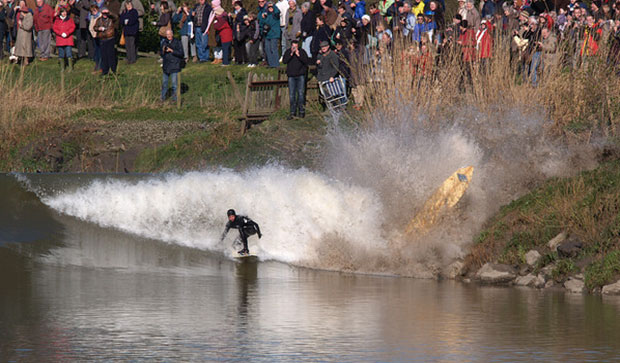 ‘They’re all just kind of farmers around here so, by no means its not a surfing community so you do kind of stand out a bit. Jump on a wave up stream and you could be riding for an hour. I’ve broken the world record  about half a dozen times, at the moment i hold the Guinness world record (12 kilometres, in a time of 1 hour 17 minutes).’ Say Steve King (local legend) 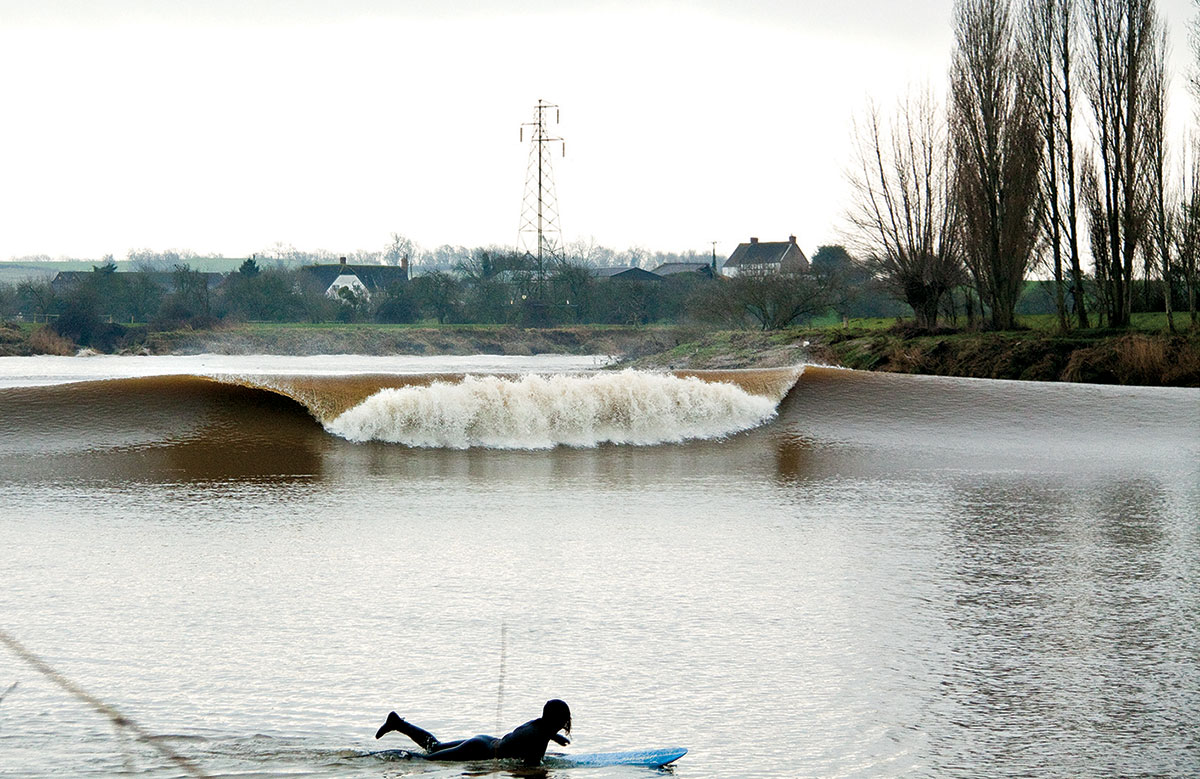 The first man to ride the river severn bore was a world war II hero by the name of John Malcolm Churchill an eccentric man nick named Mad Jack. On his first and only attempt Jack rode the bore for 1 mile up stream. This is a incredible wave, not so much for it’s shape and size but the surreality of surfing through the country side with cows on either side  is remarkable. Get out the bucket list!

If the Severn tidal bore interests you, Watch the incredible documentary about this amazing wave and surf culture in England, ‘THE ENDLESS WINTER’ playing now on Garage Entertainment.

MORE FACTS ABOUT THE SEVERN TIDAL BORE The Severn Estuary, which empties into the Bristol Channel, has the third largest tidal range in the world – about 49 feet exceeded only by the Bay of Fundy and Ungava Bay. During the highest tides rising water is funnelled up the estuary into a wave that travels upstream against the river current at a speed of 8 to 13 miles per hour. The largest bores occur in spring but smaller ones can be seen throughout the year. Being the onset of the flood tide it is accompanied by a rapid rise in water level which continues for about one and a half hours after the bore has passed. The Severn bore is not a self-reinforcing solitary wave or soliton but rather a shock wave which is formed because the wave is travelling faster than the wave speed in water above the Bore. The largest recorded bore was on 15 October 1966, when it reached a height of 9.2 feet. The Bore is best seen at the local pub in Stonebench, The Pub has a large car park and offers hot drinks and meals throughout the bores, and they also floodlight the river for night time bores. The bore can also be seen at Over Bridge which provides the only accessible ‘Over the River’ bore viewpoint. As a natural spectacle, the bore is in some respects best experienced at night when there is less chance of powerboats travelling with it: their engine noise masks the sound of the wave and their wakes diminish the sight of a single wave rapidly advancing up a smooth river. It can still be seen to some extent in the dark, and many spectators use powerful torches.

Ando, Kelly And Rasta In Tahiti

Johnny Campbell is the Undisputed King of Baja